What do YOU eat in Winter?

See a theme here?  For me, winter is all about fat and carbohydrates.  I have no qualms confessing that my diet is highly influenced by the season; I know I’m not alone here.  Most of humanity begins thinking this way as evening falls earlier and earlier and we all huddle about wondering how to survive another long, cold winter.  We may not be able to hibernate for the entire three or four months, but we can sure eat like we’re preparing to!

Tonight I made a cheesy potato-corn-white bean chowder.  It started out with onion cooked in a large chunk of butter until translucent, then a few minced cloves of garlic, two smallish diced potatoes, and about 2 1/2 cups each chicken broth and fully fat and wonderful milk, brought to a boil and simmered gently.  Oh, it smelled heavenly!  Once the potatoes were tender I added one (drained) can each of corn and white beans, a sprinkling of salt and pepper, and some cubed cheese, maybe 1/3 cup, which led to the only slightly disappointing part of the whole shebang.  In my extreme cheapness, I had forsaken the real cheese and bought processed cheese.  I was thinking Velveeta; what I got instead was a sticky white brick that refused to melt even when cut into very small pieces, meaning that instead of a consistently gooey cheesy broth, I ended up with a milky broth with bursts of cheesy(ish) goodness.

(That’s all the recipe you’re getting for this.  It’s so very simple.  And soup is really something that was made for adaptation and improvisation, so you can take this idea and recreate it yourself in whatever manner works for you.  I would suggest better cheese, though!)

And I ate it out of a mug, because it is a well known fact that soup (umm, or chowder, whatever the difference may be) always tastes best when eaten out of either a mug or a bread bowl.  Bread bowls being in short supply round these parts, I happily grasped my mug in both hands (giving the additional benefit of warm to my chilly little fingers) and soaked up my leftover broth with a warm wheat roll.  (And no, I did not butter the roll.  But I did consider it…) 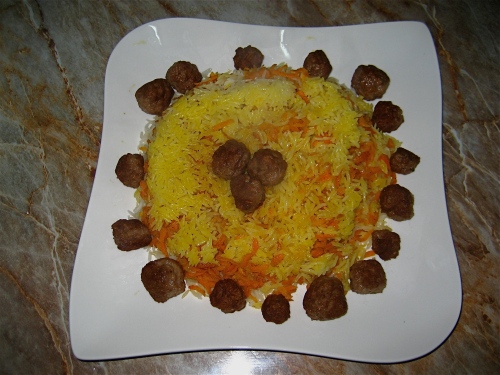 I’ve been very slack lately in cooking in general, but especially in branching out and trying new things.  It is definitely a season when I am leaning towards my comfort foods (tonight for dinner: macaroni and cheese with peas–the way my mom has always made it–and garlic mashed potatoes), and not very excited about dishes that make me think.  However, with a bag of slowly wilting carrots in the refrigerator and and inkling to eat some meat, I pulled this Persian pilaf out of my main cookbook, Ms. Roden’s The New Book of Middle Eastern Food.  (Maybe I never mentioned it before, but when we moved to the Middle East I only brought two cookbooks with me.  Two.  I realized that perhaps this was not normal when I read A Crafty Lass‘s account of paring down her cookbook collection before moving internationally.)  Anyway, this pared with some roasted vegetables was good as a main dish, and could easily be made according to vegan or vegetarian standards.

Wash the rice in warm water and rinse ina  colander under the cold water tap.

Fry the onion in 2-3 tablespoons of the butter or oil until soft and golden.  Add the grated carrots and saute gently for 10 minutes.  Add sugar and cinnamon and cook 3-4 minutes longer.

Boil the rice in salted water in a alrge (9-10 inch), heavy-bottomed, preferably non-stick saucepan for about 10 minutes, until not quite tender and still a little underdone.  Drain and mix with the remaining butter or oil, keeping aside 2 tablespoons.  Heat the 2 tablespoons butter or oil in the bottom of the pan, then spread alternate layers of rice and sauteed carrots, starting and ending with a layer of rice.  Sprinkle rose water over the top and cook over very low heat for about 30 minutes.  The rose water, a relic of early-medieval times, gives a subtle perfume to the dish.  (Note from me: I always panic at around minute 25 of cooking the rice, thinking that it must be burning, and turn it off then.  Big mistake…the end result is supposed to be a layer of crusty golden rice, but if you remove it from the heat too soon it’s more like greasy golden rice, and not so pleasant to eat.)

Note: for meatballs, season 1 1/2 pounds ground lamb (I used beef) with salt, pepper, and 1 teaspoon cinnamon.  Mix well and knead until smooth and pasty.  Shape into marble-sized balls and fry in a little oil for about 8-10 minutes, turning them over, until browned all over but still pink and juicy inside.

To serve: Turn the pot of rice upside down onto a platter on top of the meatballs, so that the meatballs are buried.  If you have achieved a good crusty golden layer of rice, that would traditionally be removed and served separately, as a delicacy.  Then the remaining rice and carrots would be stirred together.  (Clearly, I did not follow any of these steps myself.  Just telling you how it’s supposed to be done.)

I am happy to report that after what seemed like a very long, hot summer, I am sleeping under a blanket once again, enjoying the feel of my cold nose peeking out above the covers.  After all, it gets down to 72/73F in my bedroom at night—chilly!  But apparently the real cold is yet to come; yesterday the neighbors were admonishing me that we need to hurry and buy a heater, because the temperature will start dropping fast and before I know it, there will be rain and even snow.  Life in non-insulated buildings with drafty windows can become very difficult in winter for those of us who are most sensitive to the cold.

One way of dealing with this?  Spend a lot of time in the kitchen, preferably concocting things full of spices and butter and meltingly soft vegetables.  Today I wandered around the market gathering things that may not be at the height of their growth season right now, but are definitely appropriate according to my internal sense of what to be eating in autumn.  This evening, as Maghrib (sundown) happened just before 6:00 p.m., I was at the stove putting together one of my favorite fall dishes, a Moroccan-style vegetable tagine.  (I have no idea where I got this recipe…I found it somewhere on the internet three or four years ago.  My apologies to its creator.)  It is fragrant and sweet and savory and full of nutrition and makes me feel like I have a warm blanket of happiness wrapped around my internal organs.

In a large pot, heat oil and add the onions.  Cook gently for 5 minutes, then add the garlic, turmeric, ginger and cinnamon.  Cook over low heat, stirring, for 2 minutes or until aromatic.

Add the carrots and water, stir well, and cover.  Cook for 10 minutes.  Add the pumpkin/squash, sweet potatoes, chickpeas, harissa, raisins, and honey; cover and simmer until vegetables are tender.  Add salt and pepper to taste and serve with couscous.

You may be wondering at the plethora of eggplant-featuring posts lately.  Well, the story is that I went to the market a bit over a week ago, intending to buy just one wee kilo of eggplants.  But I ended up at a stall manned by a boy far too young to be working (as is the case too often in this part of the world), and he very enthusiastically proclaimed that, for the equivalent of about $1.30, he would sell me 5 kilos of eggplant.  That is 11 pounds, for those of you stuck in America’s silly measurement system.  It takes a long time and a lot of dishes for two people to eat 11 pounds of eggplant!  But partly out of pity and partly because I do really like eggplant, I went ahead and bought it, carrying home a black plastic bag with nearly a dozen eggplants inside.

We have finally finished them off, and I must admit I am not likely to buy another eggplant for a week or two.  But when I do, this soup will be very high on my list of considerations.  The idea of an eggplant soup had never crossed my mind until I read about it on Smitten Kitchen.  The original recipe, adapted from Bon Appetit, can be found there, along with Deb’s humorous account of trying to elicit taste memories from her mother.  Following her spice dilemma, I decided to take the basic idea and Middle Eastern-ize the recipe a bit.  I was very, very pleased with the final product, and even more pleased when Hungry Husband, who is generally ambivalent when it comes to soup, declared it very tasty.

Preheat oven to 400F.  On a roasting pan/cookie sheet/whatever you use, arrange the halved vegetables and drizzle with olive oil.  Roast in the oven for about 45 minutes, until the vegetables are tender.  Remove from the oven, scoop the eggplant flesh out of the skin (but if you leave a little of the skin attached, that will add a nice smoky flavor) and put in a large soup pot.  Add the tomatoes, onion, cumin and broth and bring to a boil.  Simmer for about 45 minutes or until the onion is soft, then remove from heat and let cool slightly.

About 5 minutes before you think the soup will be done simmering, heat the vegetable oil in a small frying pan.  When it is hot, add the garlic, coriander and salt and fry briefly, stirring constantly, until the aroma rises but the garlic has not browned.  Throw this into the soup for the last few minutes of simmering.

When the soup is sufficiently cool, blend it according to the method of your choosing (with an immersion blender or in batches in a stand blender) to your desired consistency.  Return to the soup pot and reheat, adding salt and pepper to taste.  After turning off the heat, add the yoghurt and stir to blend thoroughly.  Serve with crumbled feta cheese to garnish.

Side note: this soup was also really tasty cold the next day, when I felt too lazy to reheat it.

Side note #2: I also added a wee bit of tahini (sesame seed paste) to the leftovers and that was a very lovely addition.  If you wanted to include it, in the full batch I’d suggest adding 2 Tbsp. along with the yoghurt.